It's a wet and windy day here in deepest Wiltshire. The perfect day for curling up on the settee with a box of chocolates and a good book. If you're looking for something to read, you might want to give Stephen Osborne's book, 'Wrestling with Jesus' a try. Intrigued by the title? I was too. But Stephen explains all.

In my younger days, I actually did some professional wrestling, as unbelievable as that would sound to anyone who knows me! As I had a boyish face and was skinny as a rail, I was what is known as a jobber (this means I generally got the snot beat out of me). The character of Kyle in Wrestling With Jesus is based in part on a guy I had several matches with. "Kyle" was bigger than me and had long, light brown hair and a short beard and mustache. We worked well together, and I think people liked seeing him beating the crap out of me. I got a few licks in, but he always managed to mangle me in the end! It never occured to me that "Kyle" resembled a certain historical figure until I began to hear people say things like, "When are you going to fight that guy that looks like Jesus again?" When I began writing Wrestling With Jesus, (which didn't have a title at the time) the picture of Kyle and me in the ring kept coming into my mind. Naturally, the guy I used to wrestle on occasion was very different from the character in the book in terms of personality and mental prowess, but physically they are one and the same! I wonder what ever became of "Kyle?"

Excerpt: THE folded chair hit the back of Kyle’s head with a resounding thud that could be heard at the top of the bleachers. Kyle flew forward, hitting the ropes. His opponent, a rather good-looking Hispanic kid who went by the unlikely name of El Toro, swung again and slammed the chair into the center of Kyle’s back. Kyle collapsed to the canvas, seemingly dead to the world, as the crowd cheered.

Randy Stone, sitting far up in the bleachers in an attempt to distance himself from the more rabid wrestling fans in attendance, winced in sympathy. “I don’t care what he says. That’s got to hurt like a son of a bitch.”

Randy’s companion, a raven-haired beauty and card-carrying fag hag named Debbie Jacobs, munched on her popcorn. “I can’t see what attracts you to the guy. If you ask me, he’s got a hot body, but that’s about it. He’s got the brains of a split pea.”

“You haven’t even met him yet,” Randy replied, the tension in his stomach mounting to Huge Fucking Butterfly levels. He’d been worried that Debbie would be skeptical about his blossoming romance with a professional wrestler, but he’d hoped she wouldn’t start off with quite such an openly negative attitude.

“He just got hit by a chair. Twice. And he let the guy do it. Believe me, he’s got the brains of a split pea, and that’s being insulting to split peas. Don’t get me wrong, I’m sure this Kyle guy is fine for a quick fling, but you’ve been acting like he’s The One, and I just can’t see that.”

“Compared to him, you are.”

“I admit, at first it was his hot bod that attracted me, but it’s developed beyond that. I’m really falling for the guy.”

“Seems like you might fall quite literally. I’m betting he’ll want to body slam you before sex or something like that. He looks like he’s got that gorilla mentality.” Debbie chewed more popcorn. “How on earth did you ever meet up with this guy? Didn’t you say he was a closet case? You didn’t meet up at a club, then. And I’m pretty sure he isn’t a customer at your bookstore. That guy never progressed beyond Hop on Pop.” She found a kernel that hadn’t popped and spit it back into the bag.

“Would you give him a chance?” Randy pleaded. “I really like this guy, Debbie. I want the two of you to get along.”

An older gentleman near them was staring not at the ring but at Debbie, or more precisely at Debbie’s chest. She caught him and flashed the guy an angry glare. “Hey, Gomer, the action is down there in the ring.”

The man flushed and shifted his gaze back to the middle of the gym.

In the ring, the tide of events had turned. Kyle Temple had managed to kick El Toro in the genitals without the referee catching him. After several punches to El Toro’s face that would, in a real fight, have resulted in the Hispanic boy suddenly sporting at the very least a bloody nose but instead simply gave El Toro a stunned look, Kyle leaped up and dropkicked the handsome kid right out of the ring.

“It’s not real,” Randy reminded her.

“Well, duh. That poor little bastard would have been wheeled out of here on a cart minutes ago if these blows were actually landing full force.”

“It’s like playacting,” Randy continued, picking up on Debbie’s condescending attitude toward his new beau’s chosen profession. “They’re enjoying themselves and entertaining the crowd. What’s wrong with that?”

A grimy teen seated in front of Randy turned around, a sneer on his pimpled face. “You can’t fake that shit, dude. Say that any louder and Kyle Temple will come up here and pound the fuck out of you.”

Randy shrugged. “He pounded the fuck out of me pretty good last night, actually.”

Debbie laughed, nearly choking on her popcorn. The teen frowned in confusion before turning back to watch the action in the ring.

Intrigued and want to read more? Check out the details here: Wrestling with Jesus
Posted by sue laybourn at 12:44 AM No comments: Links to this post

Everybody likes the bit with the tomato. 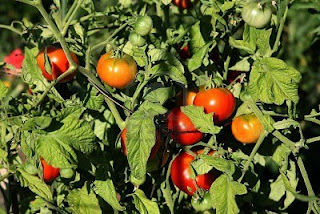 Who'd have thought it?

I wrote a scene in 'Orion Rising' where Michael and Paul, the two main characters, partake of a couple of tomatoes plucked from a vine in an underground garden. Tomatoes are important and the fact that they're growing in a world wrecked by climate change is close to miraculous.

So, it got me thinking. I have copies of 'Orion Rising' to give away. I wanted to do something other than make people tweet links to the blog to win a copy (you can tweet the link anyway, that would be very nice, thank you). I have a question and all you have to do is answer to be in with a chance of winning an e-copy of the book.

I'll pick the best two answers, or drag in a friend to pick the answers and post the winners on Wednesday, 11th April.

Just post your answer and email address for a chance to win a copy of 'Orion Rising'.
Posted by sue laybourn at 9:54 AM 18 comments: Links to this post