One of the things I really missed when we were in the US was decent Top 40 Christmas songs. I can only listen to 'Rockin' round the Christmas tree' or some soppy Country song laden with maudlin sentimentality so many times without screaming. So, one of the good things about being back in the UK are the great songs on the radio this time of year. This old grump is very slowly getting into the Christmas mood, a mood knocked back only by the price I paid for a single sad string of lights for the tree, and the endless, sodding perfume adverts on television.

There are quite a few Christmas songs that cheer me up but the one that gets me singing loud enough to frighten the cats is 'Fairytale of New York' by The Pogues and the late, great Kirsty McColl. It has one of my favorite lines of all time. Those of you who know me will probably figure out what line that is. I ain't sayin'.

Posted by sue laybourn at 7:23 AM 2 comments: Links to this post

Being Human - Thanks for kicking this writer. 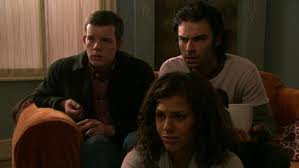 By a route too tortuous to mention, I stumbled on 'Being Human' a few months ago. I'd heard about it on the 'net but, because I was living in the US at the time, I didn't really think I'd have a chance to watch it. My lap top can't handle video streaming without overheating and I didn't want to watch the programme in ten minute snippets on a certain video sharing web site. So I resigned myself to saving up the pennies to buying the DVDs. Then BBCAmerica decided to show the first series. I watched all 6 episodes of the first series in a one day marathon and I was hooked.

All right, I have to confess, the initial attraction was the delicious Aidan Turner. I mean, really, how can any female with a pulse resist those eyes, framed by those birds-wing eyebrows?

The premise of a werewolf, vampire and ghost sharing digs in an ordinary terraced house in Bristol is a clever one and a tough one to pull off with any kind of credibility but full marks to Toby Whithouse and the cast for making it work so splendidly. BH is a compelling combination of brilliant writing and top class acting. The story carries humor, pathos, tragedy, darkness and light with no effort at all. There are moments that made me cry, moments that had me giggling helplessly and moments where all I could do was stare, open-mouthed, at the screen. I can't remember the last time a television programme has done that to me. It's also rare for something I've watched to linger with me long after the closing credits have rolled.

Apart from the main characters, the others who come into their lives leave their mark. The supporting cast are equally memorable and there are incredible turns from Paul Rhys as the ancient vampire, Ivan, Donald Sumpter as Kemp and Adrian Lester's Herrick. The on-screen chemistry between Lester and Turner crackles and sizzles - the first season is worth watching for that partnership alone.

Being Human is that rarity, a bright gem hidden away on a satellite channel. it deserves far more exposure than it currently receives and the prospect of an American remake has me reaching for the bucket. It's a story that doesn't need schmaltz, touchy-feely introspection or santitizing. It packs enough emotional punch as it is.

So, why did I revive my cobwebby old blog to bore you all with my thoughts on a television series?

Because it is so bloody good that when I finish watching an episode I want to hide myself away and write the best stuff that I can. Inspiration has been hard to find for me these past few months. Being Human has kick started my writer's brain again and, for that, I am truly thankful.

Roll on Season Three.
Posted by sue laybourn at 3:05 AM 7 comments: Links to this post