A guest post - Hawaiian Culture is about so much more than Tiki lamps and hula dancing.

Today, my thoughts are straying longingly to Hawaii. No surprise given that the guest post is written by Violetta Vane and Heidi Belleau, authors of 'Hawaiian Gothic', which was released this week by Loose Id. I am blown away by these authors who really are a much-needed breath of fresh air for the M/M genre so I was more than happy to offer them my blog as part of their Hawaiian Gothic blog tour.

If you haven't read any of their work, I suggest you do so...now!


Hawaiian Pidgin - Language of the Heart

“Today my teacher said we got to learn ‘proper’ English, so we can study things like math and science. Ho, man! Kids got plenty angry. Everybody yelling. “How we going talk to parents widdout Pidgin? Pidgin same as English.’”
She played with her fork, slightly embarrassed. “I raised my hand and said Pidgin is not the same as English. It’s not an inferior kind of English. It’s a different language from English. Like French, or Spanish. Like Hawaiian Mother Tongue...”
(House of Many Gods by Kiana Davenport, p. 52)

English is a pretty amazing language, when you think about it: a strange hybrid bastard beast of a language that now thrives all over the world in thousands of forms, all unique to the people who speak it and the places they come from. And it’s changing and evolving every single day.

It’s more than just accents that set one form of English apart from another: it’s grammatical constructions and even vocabulary. Sometimes these divisions happen along race lines, ethnic lines, lines of class and country. Sometimes these differences are celebrated (think our love for Hugh Jackman’s Aussie accent!), and sometimes (especially when a particular dialect is associated with poor non-white people) they’re denigrated. What’s merely different and what’s “incorrect”? Some of us are told not to speak our own particular version of English. Some of us voluntarily leave it behind in order to assimilate or hide our origins.

In Hawaii, the language of Pidgin developed on the plantations as workers struggled to speak to other across their many language barriers. There were native Hawaiians, Portuguese, Chinese, Japanese, Filipinos. The non-Hawaiians had come across vast oceans, leaving everything behind to start a new life on the island, prepared to spend the best years of their lives as indentured workers doing backbreaking labor so that their children would have a better chance in life. And these children lived together, played together, worked together, and invented a common tongue in the process.

So today, if you go to Hawaii, you might talk to people whose heritage, let’s say, is 100% ethnic Japanese, but their family hasn’t spoken Japanese for four generations. Their languages are English and pidgin. They can switch between the two easily, like Ana in Kiana Davenport’s House of the Gods, but pidgin is closest to their hearts. Watch the people in this introduction smile when they talk about that...

When we wrote Hawaiian Gothic, we did a lot of research to make sure the pidgin was as accurate as possible. It’s not just a matter of dropping “be” and adding in a lot of “da kine”. Ultimately, though there’s really not a lot of pidgin dialogue in the book, because both our characters are code switchers. They speak in “proper” English, occasionally in pidgin-inflected English, and only sometimes in this language of the heart...

“How did you do it?” Ori twisted to raise himself on an elbow for a better view of Kalani’s beaming smile. Ori’s other hand brushed against Kalani’s, and their fingers slipped together easily. “You look amazing. Like you were never in a coma. Did you have to sneak out of the hospital?”

Kalani’s smile fell at one corner, and there was a sudden tightness to his eyes. “Ori, I’m still there. My body…”

Ori jerked away from him like he was scalding hot. “So this isn’t real? Am I…are you…are you like a figment of my imagination or something?”

“Would a figment of your imagination be able to tell you—fuck, I guess a figment could tell you anything you wanted to hear.” Kalani hissed. “Scratch that. But I’m real. I’m an ‘uhane, a wandering spirit. I don’t know how it happened. I’m sorry. I should have told you last night. You know, before you got your hopes up.”

“You’re a ghost!” Ori scrambled off the edge of the bed, hit the floor, and crab-walked backward until he crashed into the wall and jumped to his feet. This couldn’t be happening. A rush of terror had his skin crawling and Kalani’s form wavering at the edges. He thought about praying. Thought about the rich, gory tapestry of ghost stories his grandmother would spin in Tagalog, like the one of the multo who had to kill to live again.

“Don’t be scared. Please. Look, the worst I could do was rattle some blinds. I can only stay solid for you. I don’t know why. Maybe because you never gave up on me. Not that I blame Anela. And Julie, maybe I could stay solid for her, but she’d be so afraid, she’d try to cast me out.” His lips twitched and his eyes shone, not with ghostlight but with the onset of tears. “Eh, no make like dat, brah. All hamajang, dis.” 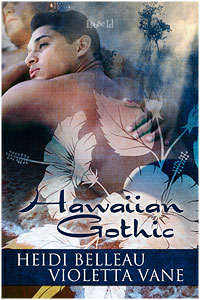 Blurb: For Ori Reyes, coming home to Hawaii is hell. His Army Ranger career ended in dishonorable discharge, a prison term and disgrace in the eyes of his family. As for his childhood friend Kalani—well, Kalani could never love him back, not the way Ori wanted to be loved. And it’s too late for Ori to tell Kalani how he really feels, because Kalani’s in a coma that all the doctors say is terminal.

Then Kalani shows up to welcome him home.

Even though Kalani's body is unresponsive, his spirit roams free, and for the first time he's able to reveal the true depth of his feelings for Ori. They set out to solve the mystery of Kalani’s dark family history, a journey of redemption that leads deep into the ancient Hawaiian spirit world. For Ori, taking on monstrous ghost-guardians is easier than facing the hardest choice of all: that he might have to let Kalani go.

Posted by sue laybourn at 12:02 AM No comments: Links to this post

Reasons to be British, Part 27 and a half: The Derby

Summer has arrived on our damp, green little island. From the dreaming spires of Oxford to the Epsom Downs, people will be hoping for good weather, for England to do well at Euro 2012 and for enough Pimms to see them through the long Jubilee weekend.

There are many things I love about an English summer and one of my favourite things is the horse racing. We Brits love our horses. Hell, even Shakespeare acknowledged that when he had Richard the Third shouting for a horse during the Battle of Bosworth. We're talking proper racing here with jockeys who ride with their brains and not with their whips. We're talking about one of the most beautifully bred, exquisite, temperamental creatures on the planet - the English Thoroughbred. I love them. I love their quirks, their beauty and their courage. I love the history and the pedigrees and the fact that today's thoroughbreds can all be traced back to a handful of scrappy stallions. It's the one thing I have in common with our Queen, this love and fascination for horses.

The Queen, bless her, takes her racing very seriously. She breeds race horses, she knows their pedigrees inside out, she names her horses, and let me tell you, she's very clever at naming them. Even when she's in the midst of the craziness surrounding the Diamond Jubilee, she still finds the time to enjoy her racing.  Today's big race is a prime example. It's the Epsom Derby, the original Derby. No Mint Juleps and red roses here. This race has been running since 1780. 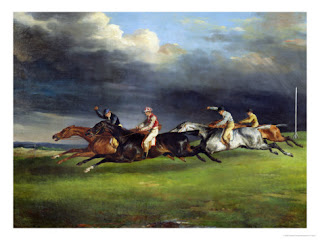 It's a huge occasion. People come by the bus load. They fill the massive stands or crowd into the infield where proceedings are less formal. It's the second race in the British 'Triple Crown' for three-year olds. It's handy that it falls during the Diamond Jubilee celebrations because it'll be an even bigger occasion than usual. The Queen will be there. She doesn't have a runner this year, but she loves her racing and it must be a nice little 'break' from the hectic itinerary she's been keeping this year.

I'll be watching. It's the end of an era today. It's the last time we'll be able to watch it on the BBC, because from next year, another channel will be covering the race. But it's the British thing to do.

Speaking of which.  Today marks the launch of a new blog. UK M/M Romance . To celebrate this most British of occasions, me and my fellow Brit Authors - Sue Brown, Chris Quinton, R J Scott and Lisa Worrall are holding a competition to win:

a $30 gift certificate to spend with Silver Publishing

The choice of an ebook from the back catalogues of:
Sue Brown, Lisa Worrall, Chris Quinton,
SA Meade & RJ Scott


All you have to do is visit the main blog, check out our questions, then visit each of our blogs to find the clues.

So, pour yourself a Pimms, tuck into those strawberries and have some fun. Happy clue hunting!

My lovely friend and Cover Art Wizard Genius, Emmy Ellis, has redesigned my blog for me.

I absolutely love it.