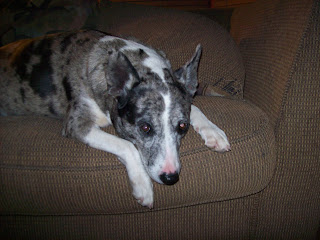 Today I had to say goodbye to a very dear friend.

Almost eight years ago to the day, a colleague delivered a spectacularly beautiful, excitable, affectionate bundle of Australian mongreldom to our front door. Patches' previous owners had decided that they didn't have the time to care for her. We were looking for a dog for our son and there she was. I took one look at those anxious brown eyes and was lost.

She was a funny mix of a dog. Her broad forehead and stocky torso screamed Queensland Heeler, as did her need to protect everything and everyone in the household. That chunky body was perched precariously on delicate Australian Shepherd legs and her coloring was clearly a legacy from the Aussie Shepherd side. She was beautiful, with absurdly large, pointy ears and a kissable pink spot on her muzzle.

Patches also dispelled the myth that mongrels enjoy rude health. Her mixed parentage led to a damaged hind leg, probably from racing like a fool around the backyard. There was the time I was summoned home from work to take her to the vet when she was bitten by something and one side of her face swelled up so much she looked more like a pit-bull. Then, there was the arthritis in her neck and spine. A cruel ailment for such a lively dog. We were lucky there because she only ever had a couple of flare-ups. Our other dog, Otto, kept her young.

I had a host of nicknames for her. Fusspot was one of them, because of her fussy little anxious steps and her worried expression. Plus, if my husband and I ever argued she would push between us and bark at him, warning him to keep away from me. She loved to have her chest rubbed and would rest her paw on my arm to keep me from stopping while she sat there grinning.

Then, there's Otto, a lumbering, good-natured chocolate labrador who was twice her weight. Yet, when it came to rough-housing in the back yard, all Patches had to do to bring him down was dive for one of his legs, pull it out from underneath him and that was the match won. They adored each other. They slept side by side, they cleaned each other, fussed over each other but she was always the boss. Today, Otto is subdued and quiet. He saw his friend get in the car and saw me walk into the house with an empty collar and lead. He knows, somehow, that she's not coming home and his sad resignation breaks my heart.

I'm sitting here watching Otto sprawled on the floor without his fussy little shadow. My eyes are burning a little. The Valley Fever that he seems perfectly able to live with, made his friend cough, killed her appetite and left her lethargic. We're leaving in a few days, we can't take him with us and we're hoping to leave him with a good home. He's young, he has a chance. Patches wouldn't have had that chance. I hated the thought of her spending her last days in a crowded, noisy shelter among strangers. It wasn't right, it wasn't the way I wanted to leave my good friend. Luckily, our vet saw that letting Patches go quietly and peacefully in that special, quiet room in her surgery was the kindest thing to do.

Since I was the one who welcomed Patches into our home, since I was the one she protected and fussed over, it seemed only right that I be there when she left this world. I can barely see as I write this. I know, that somehow, somewhere, I'll see my little Fusspot again.

Love you, Fusspot.
Posted by sue laybourn at 9:27 PM